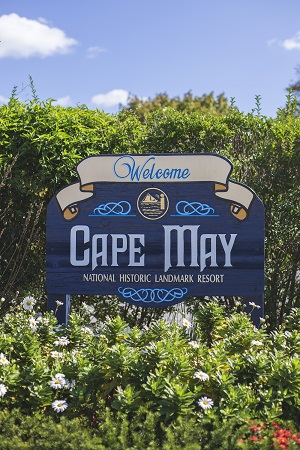 The City of Cape May, “The Nation’s Oldest Seashore Resort,” is located at the southern tip of the Cape May Peninsula in New Jersey. The city is designated the Cape May Historic District, a National Historic Landmark due to its concentration of Victorian buildings. In fact, it has the second-largest collection of Victorian houses, behind San Francisco. Cape May boasts highly rated beaches, fine dining, lodging and shopping, and is even a top worldwide destination for birdwatching!

The city was named for Dutch captain Cornelius Jacobsen Mey, who explored and chartered the area from 1611 to 1614. Cape May began hosting vacationers from the Philadelphia area in the mid-18th century and was considered one of the finest resorts in America by the 19th century.

Located at the southernmost point in New Jersey, Cape May Harbor allows fishing vessels to enter from the Atlantic Ocean, making it the second-largest fishing port on the East Coast. Tourism is a dominant industry for the city, with the economy focusing on shops, restaurants, lodging and tourist attractions including the Washington Street Mall and the beachfront promenade. Ecotourism is also prominent, featuring more than 400 recorded bird species, marine mammal watching trips, fishing trips and more.

The town is host to a variety of arts and culture opportunities including Cape May MAC-Museum, Arts & Culture, the Cape May Exit Zero Jazz Festival, the Cape May Music Festival, Cape May Stage, East Lynne Theater Co. and much more. In addition, Cape May is home to the “Cape May Diamonds,” clear quartz pebbles that wash down from the Delaware River. Collecting these gems is a popular pastime, and handcrafted jewelry often features the stones.

For more information on the City of Cape May, access the Official Cape May Visitors Guide featuring information on diversified programs and activities, a comprehensive schedule of events, and details on beach and recreational experiences. Click here to access the guide.